On January 7, 2012, my cousin Sherry, age 43, left her house in the small town of Sidney, Montana at 6:30 a.m. for an early morning run. She didn’t always run in the morning because as a teacher, it was often difficult to fit in runs before she headed to Sidney High School to teach math. January 7 was a Saturday, however, and Sherry had a bit more time to spare. After her run she planned to meet her sister, Rhonda, and head out to their parent’s ranch a few miles outside of town. Her husband, Gary, had gone for a walk at 5:30 a.m. and when he returned home he could tell that Sherry had already left for her run because of the toothpaste splatters in the sink and a light that was on in the kitchen.

Sherry often ran within the town limits and January 7 was no exception. When Sherry did not come home later that morning, however, her husband began to worry. He called the police and a search ensued. By 3:00 p.m. hundreds of volunteers were searching for Sherry and only one clue had been found, Sherry’s right Brook’s running shoe.

My aunt called to tell me that “something bad had happened in Montana.” As the details unfolded, a weight sat in the pit of my stomach. I hoped for the best, but feared the worst. Please find her. Please bring her home.

For several days there was no sign of Sherry. On the seventh day, a tip was received on the FBI’s tip line that led to the arrest of two men, one in North Dakota and one in South Dakota. One of the men confessed to killing Sherry. She had been abducted at 6:40 a.m., only about a mile from her house.

Sherry’s body has not yet been found.

Sherry’s traumatic and heinous death has shocked, angered and saddened her small community. On a much larger scale, it has also rocked the running world from coast to coast and abroad. How could something so random, violent and senseless happen to someone so giving, someone loved by so many?

We have so many emotions. As mothers, runners, and teachers,  we fear it could have been us. Our hearts break for her students, her family, her community. We feel things we don’t know how to express and we cry for someone who we have never met. We hope she did not suffer and we hope that she found peace in her final moments. The human connection often feels deepest during tragedy. These past three weeks this connection has been alive, pulsing and powerful. The goodness has poured out of each and every one of you, demonstrating that good overpowers evil.

Many of you have told me that you have dedicated your runs and races to Sherry. I have talked about wanting to do a planned virtual run in her honor. Her family has given me their blessing and Races 2 Remember has so generously donated their time to creating a running bib for Sherry. 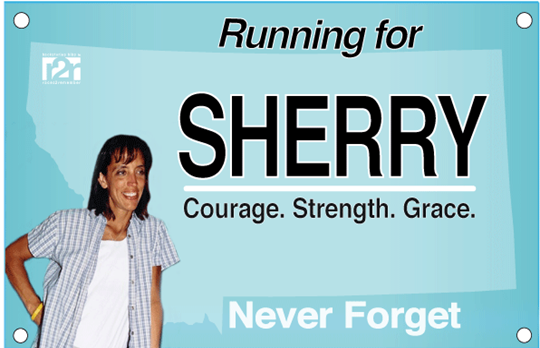 If it feels right, please blog about your run and let me know. I’m going to post links to those posts so her family and friends can read them. If you take pictures, send them to be at beth@shutupandrun.net so that I can post them here.

My goal is to get the MOST love, momentum and energy moving in honor of Sherry. This run symbolizes the beginning if healing and honors a woman who was courageous, strong and loved by so many.

For those of us in the Denver/Boulder/Longmont area I will be organizing a group run at the Boulder Reservoir that morning. I hope we can get a huge clan together and make the earth MOVE!! Stay tuned.

You may have noticed a “donate” button on my side bar. If it is within your means, please consider a donation to Sherry’s family. The funds will go to Sherry’s children, Holly and Jason.

A version of this post and information about the virtual run will appear on the Runner’s World Other Voices blog later this week.

A Facebook page has been set up for this event HERE.

Thank you from the bottom of my heart for caring about Sherry and her family and for running in her honor.