My son, Sam, was home from college for the weekend. He likes to come home because he misses me so much. Or, maybe it's because I feed him and provide him with a bed that has clean sheets (I think he told me has not yet changed his sheets on his college bed - I mean, it has only been three months since he got there so it's not like they're dirty or anything. It's not like there's B.O. and pieces of skin and drool all over them or anything). 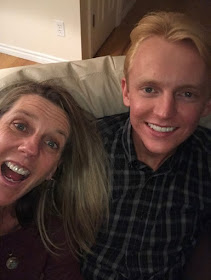 Anyhow, I asked him if he was working out anymore. He used to go to the gym pretty regularly. He said, "No. It's just so hard to get over the hump mentally to get started again." And, I completely know what he means. The thing is, that's precisely why I never take a significant break from running or exercise. Because I'm afraid if I'm gone too long and I get out of the habit, it will be that much harder to start up again.

What I've learned is that there are two things in life that are really tough (well, there are many more, but these are just two of them): breaking bad habits and starting new, healthier habits.

Take drinking wine, for example. I am very much in the habit of nightly wine drinking, for better or for worse. I know it's become a habit - a way I reward myself. A glass while I cook dinner. A glass to accompany me when I watch "This Is Us" (although I probably get even more emotionally manipulated by that show when I'm drinking). I know I could stop my nightly drinking (but why would I want to?), but it's the breaking of the habit that is so hard.

If you're old enough, you remember that we didn't used to wear seat belts. Like, not ever. Then it became the law and the norm that you had to wear a seat belt. Buzz kill. There go all of the cross country road trips where we would lay down in the back of the station wagon on the old plaid blanket from the garage. Anyway, at first putting on a seat belt was such a pain in the ass. You had to make a conscious effort to do and you felt so restricted. But, now that it has become a habit? I do it so automatically I don't even know I do it. Bingo! That's the point of this post!

Running has become that way for me. Just part of my life and my routine. Kind of like drinking wine and brushing my teeth (not at the same time). I don't run everyday, but I do run about five days a week and don't feel like myself if I don't do it.


So, how do you create a new habit or break a bad one? (I'm going to use the example of someone who wants to start drinking more water every day because their pee should be the color of Crystal Light Lemonade and it looks like Guinness, but you could apply this to running more, drinking less wine, cutting back on coffee or not eating sweets). I call this the "The Slacker's Guide" because it doesn't require a ton of imagination or creativity. Even your college kid can do it.

1. Keep the goal basic, manageable and simple. Don't go all crazy with ridiculous goals from the get go our you'll fail. Sorry, you just will. KISS (Keep It Simple Stupid). Sorry I called you stupid.

Example: I'll drink at least 48 ounces of water per day.

2. Make one very small change. Lots of small changes over a long period of time equals one gigantic change. But, again, don't try to do it all at once.

Example: I will buy a 24 ounce Nathan water bottle and have it with me when I'm at work and when I'm driving. I will drink two bottles per day.

3. Tell people. This is always a tough one for me because I don't want to announce it to the world and then have people judge and criticize me if I don't do it, because that is wildly annoying. But, I do think letting a few people know holds you accountable.

Example: Hello mom. I am going to drink more water so that I pee a brighter and healthier color. Please call me out of I'm not doing it and I promise not to say "STFU Mom!"

4. Embrace the discomfort. Making change is hard and even if you are doing it for your health or some positive reason, it is still hard. So when it gets hard, don't fuck up. Just surrender to the suck of it and move forward. It will be an up and down journey.

Example: God. I am so fucking sick of drinking two 24 ounces bottles of water a day. I just can't do it anymore. Wait. Yes I can. Drinking all this water will be hard at times, but my skin looks better and I pee Crystal Light!

5. Commit to three weeks. Someone once said (probably George Washington or Beyonce) that creating a new habit or breaking an old one takes 21 days. So, assume it will get much easier beyond this point.


I know this sounds simple. It actually is simple in theory. But putting it into action gets tough. The trick is to just make the decision to do these four things and to not be side-railed. Don't be like everyone else and wait until January 1st to create new habits or break old ones. There's no time like the present.

What's one habit you want to break or start?